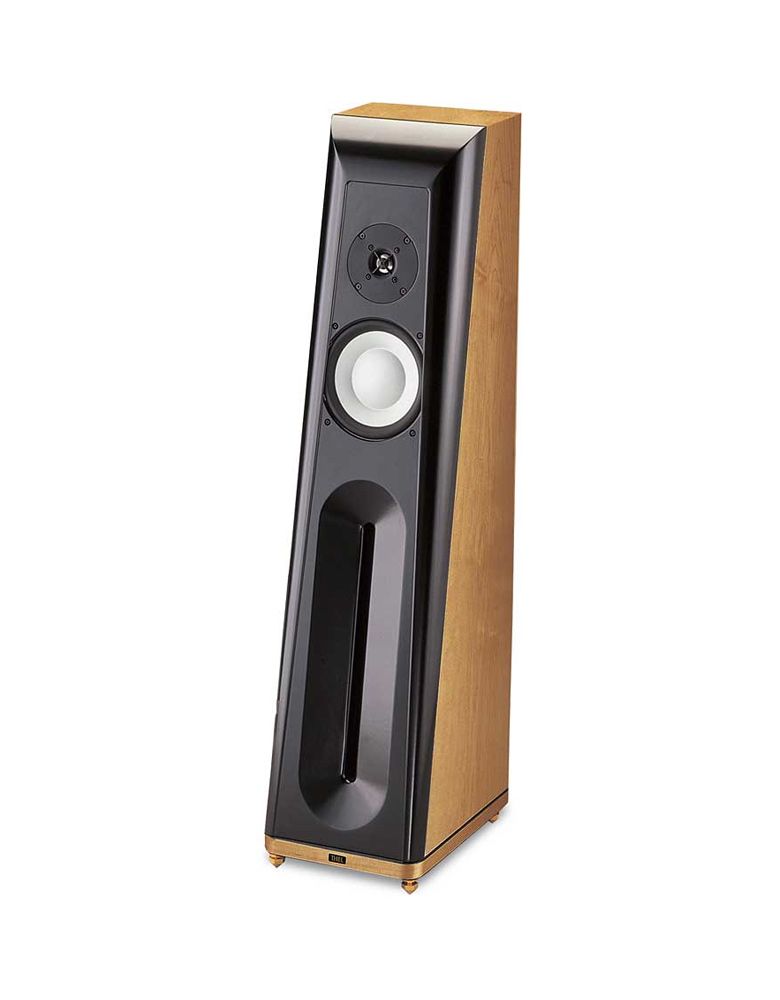 The CS1.6 has a revealed recurrence reaction of 48Hz to 20kHz and an affectability rating of 90dB into a genuinely steady four Ohm load making it a perfect speaker for coordinated intensifiers or mid-fi isolates with as meager as 50 watts on tap. In any case, similar to all THIEL speakers the more force you can push to the CS1.6 the more open, dynamic and normal it will sound.

Talking about sound the CS1.6 is one sly fox, having a somewhat laid back, tempting sound that figures out how to be roomy and pleasantly nitty gritty and sound a lot bigger than the speaker's size would have you accept. The CS1.6's bass execution is somewhat fantastic considering its plan and driver supplement, however for genuine full range execution you'll need to mate the CS1.6 to a skilled subwoofer. That being stated, audiophiles with little to medium measured rooms may have the option to pull off depending exclusively on the CS1.6's bass abilities. The CS1.6's midrange and high recurrence execution is top notch and extremely smooth and refined. The tweeter is for all intents and purposes glare free and never exhausting while the midrange is very light-footed, if you have the correct force, and liberated from overabundance swell or counterfeit warmth. What I like most about the CS1.6 is its soundstage, which is more profound and more extensive than most anything in its group and firmly and normally characterized. I wouldn't consider the CS1.6 the most unique speaker on the planet yet it's a long way from the most noticeably terrible; again it's a fairly laid back introduction.

The THIEL CS1.6's compact footprint and solid finish make it an easy speaker to live with and integrate into virtually any environment. While the black ash and natural cherry finishes are nice enough, the dark cherry finish, complete with up charge, is probably the look most consumers will go for.
• The CS1.6's ability to be purchased via one of the Internet's largest electronics retailers, Crutchfield, means they're far more accessible then ever before. -though I'm sure some long standing THIEL dealers and fans are probably pissed. • The CS1.6 may just be the perfect speaker to sit down to after a long day at work and simply drift away in front of with a glass of wine thanks to its seductive, slightly calm demeanor.
• The CS1.6 sounds simply superb when mated to tubes, especially Audio Research tube amplifiers and preamps.
• The CS1.6's high frequency performance is good, very airy and natural and never fatiguing.
• The CS1.6's midrange is outright addictive and spot on when it comes to female vocals and small, acoustic ensemble recordings.

Low Points
• For true, full-range music reproduction you're going to want to mate a sub or two to the CS1.6.
• The CS1.6 is hardly the most dynamic speaker on the block even when powered with the proper components. The CS1.6 lacks a bit of bite and attack other speakers in its class have.
• The CS1.6s are a grown up speaker in that they can play loud but at times you get the feeling they don't want to. Again, this is not a speaker for R&B or heavy metal fans. If you're into Diana Krall, Norah Jones or Eric Clapton's later work the CS1.6 is for you.

Conclusion
For around $2,400 retail the CS1.6 from THIEL is a magnificent achievement and a fine sounding loudspeaker. Its compact and stylish design score points in the wife acceptance arena as well as make it one of the easier speakers to integrate into a true living environment. The CS1.6 can be powered by a wide range of components, making it a great speaker to evolve and experiment with. It acts more like a high quality monitor speaker in terms of its overall sound than a floor standing speaker and possesses one of the most seductive midranges and soundstages you're likely to hear this side of the $5,000. While not the most dynamic or energetic loudspeaker out there today, the CS1.6 is a great speaker to come home and relax to

Reviews
Write Your Own Review
OUR BRAND PARTNERS
getQuickviewInit()); ?>
Close